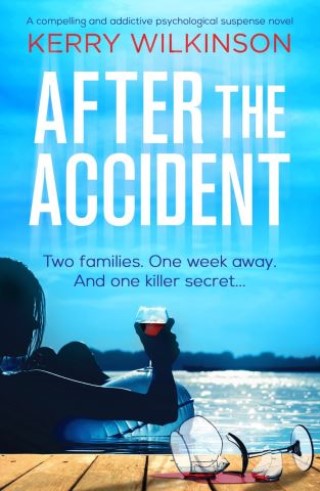 ‘Oh my God, this book was so so addicting! I just couldn’t stop… so many twists and turns in this tale that it kept me on the edge of my seat til the very last page.’ Bookshelf Life

After the accident which tore apart her family, Emma is shocked to be invited away to a beautiful Mediterranean island – but when her mother calls her out of the blue, wanting to make amends, she can’t say no.

Julius hasn’t seen his sister Emma in years. Although he can’t ever trust her again after what she did, he’s willing to put their differences aside for the sake of their elderly parents.

Despite what happened in the past, everything is going surprisingly well – days spent sipping sangria by the pool, evenings spent forcing smiles at the dinner table – until the night Julius and Emma’s father is attacked on the beach and left for dead on the sand.

She says: Nobody would benefit from our father’s death more than Julius.

He says: We all know what Emma’s capable of. And no-one knows where she was that night.

She says: He’s always been a liar.

He says: She looked me in the eye and told me she wanted our father dead.

Everyone is lying about what happened on the beach that hot summer night. And when the truth is revealed, it will be more shocking than either of them ever imagined.

A unique and totally gripping psychological thriller that will have fans of T.M. Logan and The Girl on the Train racing through the pages late into the night.

Read what everyone’s saying about After the Accident:

‘Wow oh wow! This is the most amazing book! This author is an absolute genius… I have devoured this book in just hours… I will be recommending this read to friends just so that I can discuss how utterly fantastic it is… a definite five star rating from me.’ Little Miss Book Lover 87, 5 stars

‘Everything a psychological thriller ought to be… I was left gasping like a goldfish when I reached the end… I had high grade fever when I read this book… my mind was completely hypnotized by the story. I even forgot to take my medicines. It was that brilliant. All I could say at the end of the book was – MORE PLEASE!!’ Goodreads Reviewer, 5 stars

‘This is absolutely AMAZING!!..…