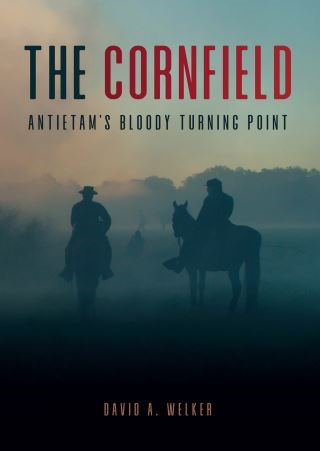 For generations of Americans, the word Antietam—the name of a bucolic stream in western Maryland—held the same sense of horror and carnage that the date 9/11 does for Americans today. But Antietam eclipses even this modern tragedy as America’s single bloodiest day, on which 22,000 men became casualties in a war to determine our nation’s future.

Antietam is forever burned into the American psyche as a battle bathed in blood that served no military purpose and brought no decisive victory. This much Americans know was true. What they didn’t know was why the battle broke out at all—until now. The Cornfield: Antietam’s Bloody Turning Point tells for the first time the full story of the struggle to control “the Cornfield,” the action on which the costly battle of Antietam turned. Because Federal and Confederate forces repeatedly traded control of the spot, the fight for the Cornfield is a story of human struggle against fearful odds, men seeking to do their duty, and a simple test of survival. Many of the firsthand accounts included in this volume have never before been revealed to modern readers or assembled in such a comprehensive, readable narrative.

At the same time, The Cornfield offers fresh views of the battle as a whole, arguing that two central facts doomed thousands of soldiers. This new, provocative perspective is certain to change our modern understanding of how the battle of Antietam was fought and its role in American history.