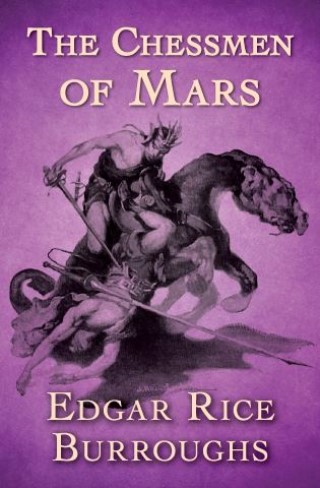 The Chessmen of Mars

The Barsoom series continues: A princess is taken prisoner by aliens and forced to play a deadly game in this classic sci-fi fantasy novel.

The daughter of Earthman John Carter and Martian Princess Dejah Thoris, Tara, Princess of Helium, was raised to be strong and independent. When Prince Gahan of Gathol seeks her hand in marriage, Tara is unimpressed by his dandyish ways. But while out flying in a storm, she finds herself stranded in an unfamiliar region of Barsoom, and she is captured by the Kaldanes, a strange species of aliens with gigantic heads and tiny, crablike legs.

While imprisoned, Tara wins the heart of a Kaldane called Ghek and hopes he will let her go free. But she is instead rescued by a dashing and mysterious warrior—none other than Prince Gahan in disguise. But when Tara, Prince Gahan, and Ghek are all captured in the city of Manator, new dangers confront them: Tara will be made the prize of a brutal game of Martian Chess, in which living pieces must fight to the death . . .

Edgar Rice Burroughs:
Edgar Rice Burroughs was an American fiction writer best known for his celebrated and prolific output in the adventure and science-fiction genres. Among the most notable of his creations are the jungle hero Tarzan, the heroic Mars adventurer John Carter, and the fictional landmass within Earth known as Pellucidar.