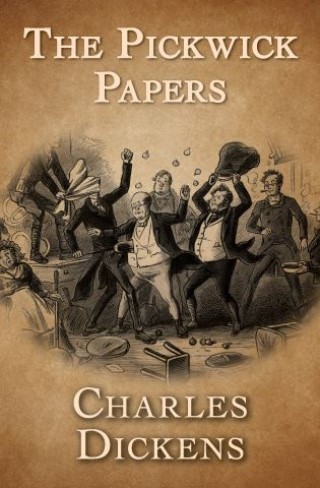 Dickens’s first novel follows the comic adventures of a band of men as they journey around nineteenth-century England.

Set in the early nineteenth century, The Pickwick Papers follows well-off gentleman Samuel Pickwick, who forms a club with three friends. Their goal is to travel through the English countryside by coach, observing the world beyond London and staying at inns along the way.

The reader follows Pickwick and his pals—less-than-skillful sportsman Nathaniel Winkle; self-proclaimed poet Augustus Snodgrass; and obese Tracy Tupman, who fancies himself a ladies’ man—as they stumble into both adventure and trouble. Joined by Pickwick’s valet, a talkative coachman, and another traveler with a knack for tall tales, this merry band will entertain the reader while offering a tour of England in the 1820s, populated by an assortment of colorful characters.

Charles Dickens:
An international celebrity during his lifetime, Charles Dickens (1812­–1870) is widely regarded as the greatest novelist of the Victorian era. His classic works include A Christmas Carol, Oliver Twist, David Copperfield, Great Expectations, and A Tale of Two Cities, one of the bestselling novels of all time. When Dickens was twelve years old, his father was sent to debtors’ prison, and the boy was forced to work in a boot-blacking factory to support his family. The experience greatly shaped both his fiction and his tireless advocacy for children’s rights and social reform.