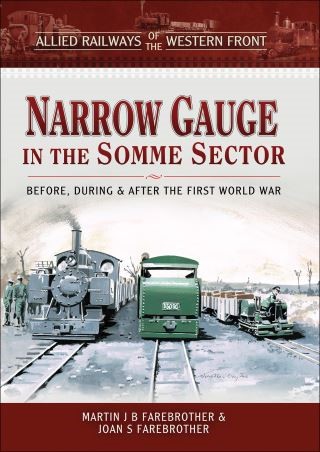 Narrow Gauge in the Somme Sector

Before, During & After the First World War

The Somme sector of the Western Front was held by French forces until early 1916, when the British and Dominions Third and Fourth Armies moved into the northern part, before the joint First Battle of the Somme from July to November 1916. In 1917, with the German withdrawal to the Hindenburg Line, British responsibility moved further south. By early 1918 the British Third and Fifth Armies were responsible as far south as east of Noyon. In Spring 1918 the German attack and advance from the Hindenburg Line came west almost to Amiens. However the British and French Armies finally stopped the advance, and from August 1918 drove the German Army back eastwards until the Armistice on 11 November 1918.In this book the meter gauge networks established before the First World War are examined. Then the build up of light (60cm gauge) railways, initially mainly French but later British, in 1915 and 1916, is considered, with an assessment of the contribution of these and the meter gauge lines to the war effort. With the major movements of the front line in this sector in 1917 and 1918, the response of the narrow gauge railways is considered chronologically as well as by area, in the context of overall railway policy and development. After the war the light railways contributed to the reconstruction of the devastated areas, and then in some places served the sugar beet industry. The meter gauge railways were rebuilt or repaired. The story is followed to the closure of the last of these railways in the 1960s.This book is a companion volume to Narrow Gauge in the Arras Sector (Pen & Sword Transport, 2015) by the same authors. It refers also to other previous works on British and French railways in the First World War, but contains sufficient information to stand alone. It describes how to find key locations now, and where rolling stock can be seen. Some walks are included for those who wish to explore the territory.