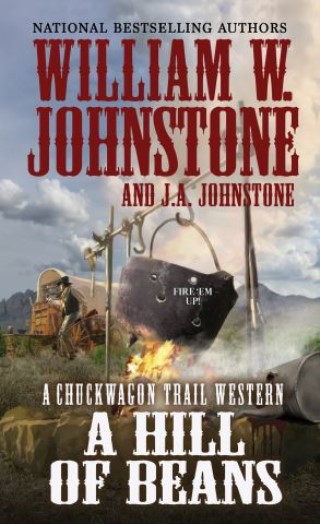 A Hill of Beans

Johnstone Country. Come and Get It.

Framed for a murder he didn’t commit, Dewey “Mac” Mckenzie is a wanted man who ends up on a cattle drive heading west—as a chuckwagon cook. Though he’s never even boiled an egg, Mckenzie has a natural gift for cobbling together good trail drive grub.

Now, with two trail drives under his belt, Mckenzie has proven to be more than a good chuckwagon cook. He’s good at serving up justice, too—with a side of hot lead . . .

A HILL OF BEANS

Mac Mckenzie has enough problems on his plate. He’s got bounty hunters on his tail, no one on his side, and no place to hide. Just when he thinks it can’t get any worse, he hears the rumbling of a cattle stampede—heading straight for his camp.  Mac’s got two choices: Get trampled like a weed or saddle up and help get the herd under control. At first, the traildrivers ain’t too pleased to have a stranger help them out. But once they realize Mac’s not a rustler, they ask him to join the team. Mac takes them up on the offer—especially after he meets the cowgirl Colleen—and quickly impresses everyone with his cooking skills. There’s just a few more problems:

Mac’s new employers might be the real rustlers. And Mac’s stepped out of the frying pan into the fire . . .