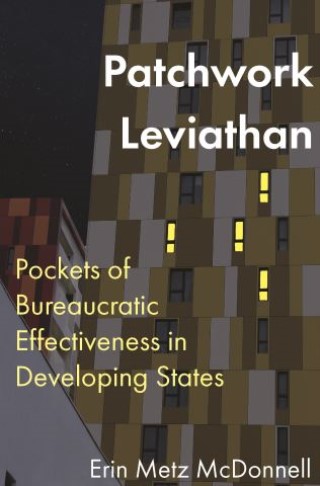 Corruption and ineffectiveness are often expected of public servants in developing countries. However, some groups within these states are distinctly more effective and public oriented than the rest. Why? Patchwork Leviathan explains how a few spectacularly effective state organizations manage to thrive amid general institutional weakness and succeed against impressive odds. Drawing on the Hobbesian image of the state as Leviathan, Erin Metz McDonnell argues that many seemingly weak states actually have a wide range of administrative capacities. Such states are in fact patchworks sewn loosely together from scarce resources into the semblance of unity.

McDonnell demonstrates that when the human, cognitive, and material resources of bureaucracy are rare, it is critically important how they are distributed. Too often, scarce bureaucratic resources are scattered throughout the state, yielding little effect. McDonnell reveals how a sufficient concentration of resources clustered within particular pockets of a state can be transformative, enabling distinctively effective organizations to emerge from a sea of ineffectiveness.

Patchwork Leviathan offers a comprehensive analysis of successful statecraft in institutionally challenging environments, drawing on cases from contemporary Ghana and Nigeria, mid-twentieth-century Kenya and Brazil, and China in the early twentieth century. Based on nearly two years of pioneering fieldwork in West Africa, this incisive book explains how these highly effective pockets differ from the Western bureaucracies on which so much state and organizational theory is based, providing a fresh answer to why well-funded global capacity-building reforms fail—and how they can do better.