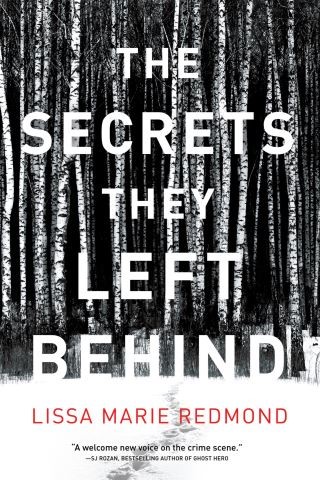 The Secrets They Left Behind

Three missing girls, no leads, a vault of dark secrets, and a case that's getting chillier by the minute, set the stage for this nail-biting procedural from former cold case homicide detective and acclaimed author Lissa Marie Redmond.

Three college freshmen go missing from their rural hometown of Kelly's Falls while on Christmas break. Their cell phones, coats, and purses are left behind, but the girls have disappeared without a trace. As the days turn into weeks and the investigation grows cold, twenty-three year old Buffalo police officer Shea O'Connor is called on to dig up leads undercover.

Still bearing the emotional and physical scars of a previous case, O'Connor infiltrates as eighteen-year-old Shea Anderson, a college freshman and the "niece" of the town's police chief. As she begins to immerse herself in the missing girls' world, befriending their friends and family, and doing whatever it takes to maintain her cover, O'Connor realizes the track is far colder than she initially thought. But whoever was behind the girls' disappearance was only warming up, and they have set their crosshairs directly on her.

The heat is on for O'Connor as she closes in on the shocking truth about what really happened the night the girls vanished.

Lissa Marie Redmond: Lissa Marie Redmond is a retired cold case homicide detective from Buffalo, NY. She handled a number of high-profile cases and appeared on numerous television shows including Dateline and Murder by Numbers. Her short fiction has appeared in Buffalo Noir, Down & Out:The Magazine and other publications. Her Cold Case Investigation series was published by Midnight Ink Books. A proud wife and mom to two children, Redmond lives and writes in Buffalo.