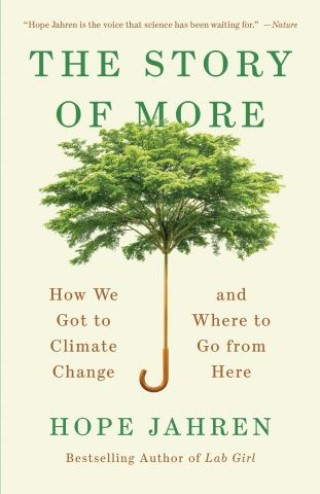 The Story of More

“Hope Jahren is the voice that science has been waiting for.” —Nature

“A superb account of the deadly struggle between humanity and what may prove the only life-bearing planet within ten light years, written in a brilliantly sardonic and conversational style.” —E. O. Wilson

“Hope Jahren asks the central question of our time: how can we learn to live on a finite planet? The Story of More is thoughtful, informative, and—above all—essential.” —Elizabeth Kolbert, author of The Sixth Extinction

Hope Jahren is an award-winning scientist, a brilliant writer, a passionate teacher, and one of the seven billion people with whom we share this earth. In The Story of More, she illuminates the link between human habits and our imperiled planet. In concise, highly readable chapters, she takes us through the science behind the key inventions—from electric power to large-scale farming to automobiles—that, even as they help us, release greenhouse gases into the atmosphere like never before. She explains the current and projected consequences of global warming—from superstorms to rising sea levels—and the actions that we all can take to fight back. At once an explainer on the mechanisms of global change and a lively, personal narrative given to us in Jahren’s inimitable voice, The Story of More is the essential pocket primer on climate change that will leave an indelible impact on everyone who reads it.

Hope Jahren: Hope Jahren is an award-winning scientist who has been pursuing independent research in paleobiology since 1996. Recognized by Time in 2016 as one of the 100 most influential people in the world, she is the recipient of three Fulbright Awards and served as a tenured professor at the University of Hawaii in Honolulu from 2008 to 2016, where she built the isotope geobiology laboratories. She currently holds the J. Tuzo Wilson professorship at the University of Oslo, Norway.