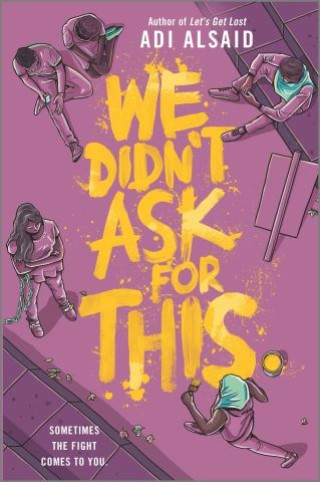 We Didn't Ask for This

From Adi Alsaid, the acclaimed author of Let’s Get Lost, Never Sometimes Always, and North of Happy

Every year, lock-in night changes lives. This year, it might just change the world.

Central International School’s annual lock-in is legendary — and for six students, this year’s lock-in is the answer to their dreams. The chance to finally win the contest. Kiss the guy. Make a friend. Become the star of a story that will be passed down from student to student for years to come.

But then a group of students, led by Marisa Cuevas, stage an eco-protest and chain themselves to the doors, vowing to keep everyone trapped inside until their list of demands is met. While some students rally to the cause, others are devastated as they watch their plans fall apart. And Marisa, once so certain of her goals, must now decide just how far she’ll go to attain them.

Adi Alsaid: Adi Alsaid was born and raised in Mexico City. He attended college at the University of Nevada, Las Vegas. He's now back in Mexico City, where he writes, coaches basketball, and makes every dish he eats as spicy as possible. In addition to Mexico, he's lived in Tel Aviv, Las Vegas and Monterey, California. His books include Let's Get Lost, Never Always Sometimes, and North of Happy. Visit Adi online at www.SomewhereOverTheSun.com, or on Twitter: @AdiAlsaid.