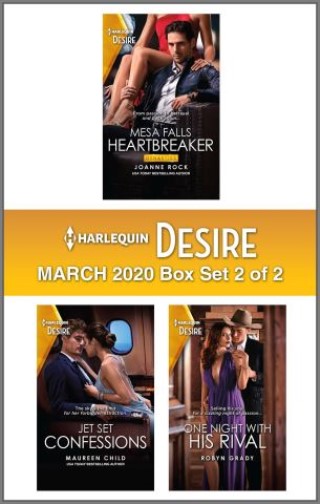 Do you love stories with sexy, romantic heroes who have it all—wealth, status, and incredibly good looks? Harlequin® Desire brings you all this and more with these three new full-length titles in one collection!

Gage Striker vows to protect Mesa Falls Ranch from prying paparazzi at any cost—even when the press includes his former lover, Elena Rollins. Past misunderstandings fuel current tempers, but will this fire between them reignite their attraction?

Fiona Jordan is a professional fixer and her latest job is bringing billionaire Luke Barrett back to his family business. As she goes undercover, the sparks between them are instant and undeniable. But she learns not everything is easy to fix when Luke discovers her true identity…

After a night of passion, smooth-talking cowboy Ajax Rawson and successful life coach Veda Darnel don’t expect it to happen again…until it does. But will old family business rivalries threaten to end their star-crossed romance before it even begins?

Joanne Rock: USA TODAY bestselling author Joanne Rock credits her decision to write romance to a book she picked up during a flight delay that engrossed her so thoroughly, she didn't mind at all when her flight was delayed two more times. Giving her readers the chance to escape into another world has motivated her to write over ninety books for a variety of Harlequin series. Maureen Child is the author of more than 130 romance novels and novellas that routinely appear on bestseller lists and have won numerous awards, including the National Reader's Choice Award. A seven-time nominee for the prestigous RITA award from Romance Writers of America, one of her books was made into a CBS-TV movie called THE SOUL COLLECTER.  Maureen recently moved from California to the mountains of Utah and is trying to get used to snow.   Robyn Grady has sold millions of books worldwide, and features regularly on bestsellers lists and at award ceremonies, including The National Readers Choice, The Booksellers Best and Australia's prestigious Romantic Book of the Year.
When she's not tapping out her next story, she enjoys the challenge of raising three very different daughters as well as dreaming about shooting the breeze with Stephen King during a month-long Mediterranean cruise.
Contact her at www.robyngrady.com