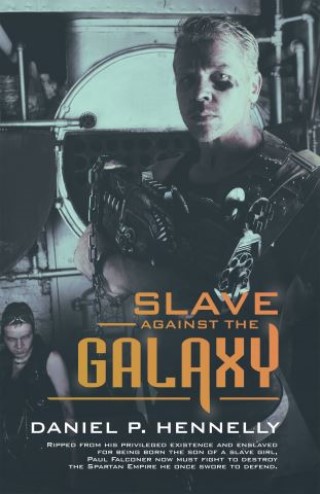 Slave Against the Galaxy

PAUL FALCONER War Hero Ensign Paul Falconer earns Sparta’s highest award for valor during it 29th century war with the Earth Federation. Growing up, he emulated his late father, a revered war hero. Like its ancient namesake, Sparta is built on a foundation of slavery. The heir to the throne, Lord Sebastian, despises Paul behind a façade of friendship. Sebastian’s fiancée, Artemis, conducts a dangerous love affair with Paul. Slave In a deathbed message, Paul’s mother reveals he was born a slave and illegally adopted. Shipped home to Sparta, he perseveres against the harsh yoke of slavery. Unable to erase Artemis from his heart, he must watch from afar as she marries Sebastian. Freedom Fighter Paul’s quest to solve the mystery of his adoption unlocks the empire’s darkest secret. Joining the slaves’ clandestine resistance group, he enlists in a suicidal mission to begin the fight for liberation.