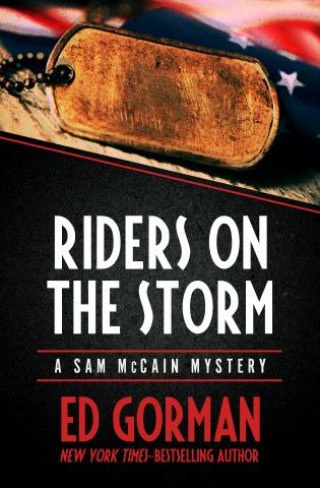 Riders on the Storm

Sam McCain investigates the murder of a friend involved in an anti–Vietnam War group in this thrilling series finale by the Shamus Award–winning author.

Iowa, 1971. When we last encountered Sam McCain, in author Ed Gorman’s “absorbing mystery” Ticket to Ride, he had been drafted to fight the war in Vietnam (Booklist). But Sam’s military career ended in boot camp when he was accidentally shot in the head and forced to spend three months recovering at a military hospital.

Now Sam’s back in Black River Falls, where he works as a lawyer and investigator, just in time to witness two of his oldest friends come to blows. Veteran Steve Donovan savagely beats his friend and fellow veteran Will Cullen when Will joins an antiwar group. Then Will is found murdered and Steve becomes the primary suspect. But there are others in Black River Falls with reason to want Will dead. And Sam suspects he’ll discover even more before his investigation is over.

Ed Gorman:
Ed Gorman (b. 1941) is an American author best known for writing mystery novels. After two decades in advertising, he began publishing novels in the mid-1980s. While using the pen name Daniel Ransom to write popular horror stories like Daddy’s Little Girl (1985) and Toys in the Attic (1986), he published more ambitious work under his own name, starting with Rough Cut (1986). A story about murder and intrigue inside the advertising world, it was based on his own experience, and introduced Midwestern private detective Jack Dwyer, a compassionate sleuth with a taste for acting.
Gorman’s other series characters include Robert Payne, a psychological profiler, and Leo Guild, a bounty hunter of the Old West, but his best-known character is probably Sam McCain, a gentle young sleuth of the 1950s, who first appeared in The Day the Music Died (1998). Besides writing novels, Gorman is a cofounder of Mystery Scene magazine.