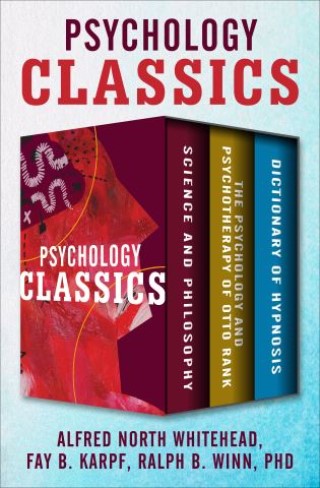 Science and Philosophy, The Psychology and Psychotherapy of Otto Rank, and Dictionary of Hypnosis

Three classic texts in one: essays by Alfred North Whitehead, an authoritative study of Otto Rank, and an essential reference book on hypnosis.

In Science and Philosophy, Alfred North Whitehead presents his mature thought on topics ranging from education to science and mathematics; from the theories of John Dewey to Albert Einstein. These collected essays cover his positions in a deep and extraordinarily unified way.

Austrian psychologist Otto Rank is one of the most influential figures of modern psychotherapy. A protégé́ of Sigmund Freud, he made significant developments in the fields of analysis, psychotherapy, counseling, education, and social work. In The Psychology and Psychotherapy of Otto Rank, social psychologist Fay B. Karpf—who studied with Rank—presents an authoritative analysis of his pioneering work and legacy.

Dictionary of Hypnosis has been an essential text on the subject since its first publication in 1965. Written by psychology professor Dr. Ralph B. Winn, this wide-ranging reference book provides a substantial amount of information on the history of hypnosis and its various uses in contemporary medicine, psychology and other sciences.

Alfred North Whitehead:
Alfred North Whitehead, OM FRS (15 February 1861–30 December 1947) was a philosopher and mathematician. He is the founding father of the philosophical school of process philosophy. This school has found many areas of application to the disciplines of ecology, theology, education, physics, biology, economics, and psychology. His early work was in logic, and physics. The three-volume Principia Mathematica (1910–13), written with Bertrand Russell is considered to be one of the most important classical works in mathematical logic. Starting late in 1910 Whitehead developed an interest in philosophy of science, and metaphysics. Whitehead’s main point of departure from western philosophy is that reality was fundamentally constructed by events rather than substances which means that both are intertwined in a web of reality. Whitehead argued that “there is urgency in coming to see the world as a web of interrelated processes of which we are integral parts, so that all of our choices and actions have consequences for the world around us.”