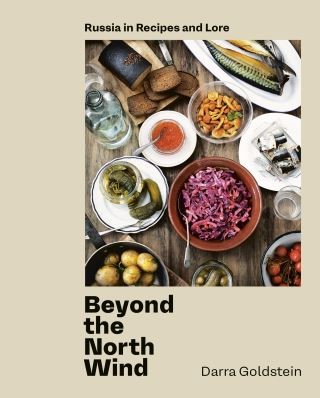 Beyond the North Wind

Russia in Recipes and Lore [A Cookbook]

100 traditional yet surprisingly modern recipes from the far northern corners of Russia, featuring ingredients and dishes that young Russians are rediscovering as part of their heritage.

Russian cookbooks tend to focus on the food that was imported from France in the nineteenth century or the impoverished food of the Soviet era. Beyond the North Wind explores the true heart of Russian food, a cuisine that celebrates whole grains, preserved and fermented foods, and straightforward but robust flavors.

Recipes for a dazzling array of pickles and preserves, infused vodkas, homemade dairy products such as farmers cheese and cultured butter, puff pastry hand pies stuffed with mushrooms and fish, and seasonal vegetable soups showcase Russian foods that are organic and honest--many of them old dishes that feel new again in their elegant minimalism. Despite the country's harsh climate, this surprisingly sophisticated cuisine has an incredible depth of flavor to offer in dishes like Braised Cod with Horseradish, Roast Lamb with Kasha, Black Currant Cheesecake, and so many more.

This home-style cookbook with a strong sense of place and evocative storytelling brings to life a rarely seen portrait of Russia, its people, and its palate--with 100 recipes, gorgeous photography, and essays on the little-known culinary history of this fascinating and wild part of the world.

Darra Goldstein: Darra Goldstein is the author of Fire + Ice, which was nominated for James Beard, IACP, and The Art of Eating awards. The founding editor of Gastronomica: The Journal of Food and Culture, named Publication of the Year by the James Beard Foundation, Darra also serves as series editor of California Studies in Food and Culture, and has written for Gourmet, Saveur, Bon Appétit, and The New York Times.