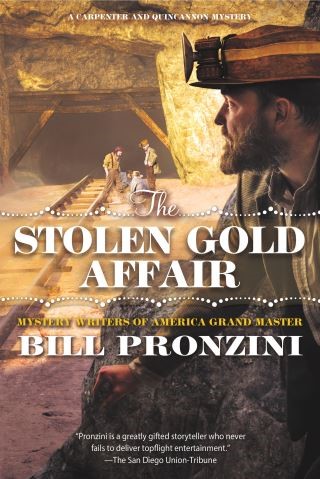 A Carpenter and Quincannon Mystery

In response to a string of gold thefts in a Mother Lode mine, Quincannon goes undercover as a newly-hired miner to identify and capture the men responsible.

Meanwhile, Sabina finds herself not only making plans for her and Quincannon’s wedding, but also investigating both an audacious real estate scam and an abusive young man's villainous secret.

The Carpenter and Quincannon Mysteries:
#1 The Bughouse Affair
#2 The Spook Lights Affair
#3 The Body Snatchers Affair
#4 The Plague of Thieves Affair
#5 The Dangerous Ladies Affair
#6 The Bags of Tricks Affair
#7 The Flimflam Affair
#8 The Stolen Gold Affair

BILL PRONZINI has been nominated for, or won, every prize offered to crime fiction writers, including the Grand Master Award from the Mystery Writers of America. It is no wonder, then, that Detroit Free Press said of him, "It's always nice to see masters at work. Pronzini's clear style seamlessly weaves [storylines] together, turning them into a quick, compelling read." He lives and writes in California, with his wife, crime novelist Marcia Muller.