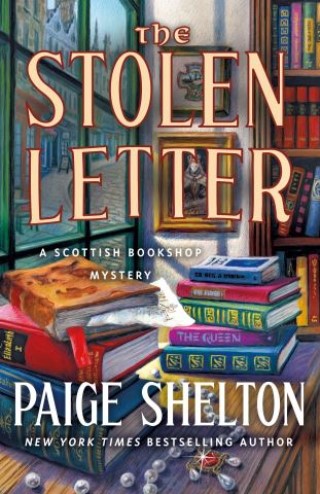 Delaney Nichols is confident she’s doing what she loves—case in point, just one day after returning from her fabulous European honeymoon, she’s eager to get back to the Cracked Spine, the bookstore where she works. But as she disembarks her bus and hurries toward the shop she and another woman collide, sending a stack of books the woman is carrying to the ground.

Delaney’s hapless victim’s name is Mary, and the two women can’t help but notice that they bear an uncanny resemblance to one another. According to Mary, they both also look like the long-beheaded Mary Queen of Scots. Even stranger, Mary believes she is the reincarnation of the Scottish queen. But peculiar as Delaney’s doppelganger is, she doesn’t have time to dwell on it: on her arrival to the bookshop, she learns the Edinburgh city council wants to close the Cracked Spine, citing code violations, and she’s determined to stop them.

But when Mary’s husband dies in a car explosion—and Delaney learns he was the very member of city council who proposed that the city take a closer look at the bookshop’s construction—she starts to wonder if her meeting with Mary wasn’t an accident. Edinburgh has become as filled with intrigue and deception as any European court, and Delaney is determined to get to the bottom of this royal mystery.

Paige Shelton: PAIGE SHELTON had a nomadic childhood, as her father's job as a football coach took her family to seven different towns before she was even twelve years old. After college at Drake University in Des Moines, Iowa, she moved to Salt Lake City. She thought she'd only stay a couple years, but instead she fell in love with the mountains and a great guy who became her husband. After many decades in Utah, she and her family now live in Arizona. She writes the Scottish Bookshop Mystery series, which begins with The Cracked Spine.