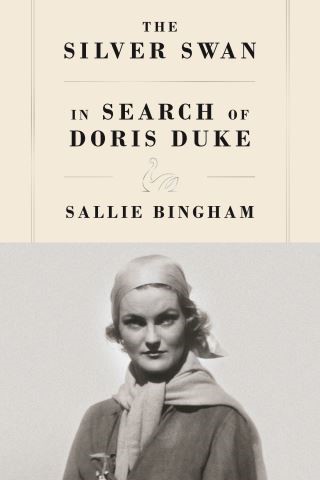 In Search of Doris Duke

"Men who inherit great wealth are respected, but women who do the same are ridiculed. In The Silver Swan, Sallie Bingham rescues Doris Duke from this gendered prison and shows us just how brave, rebellious, and creative this unique woman really was, and how her generosity benefits us to this day.” —Gloria Steinem

A bold portrait of Doris Duke, the defiant and notorious tobacco heiress who was perhaps the greatest modern woman philanthropist

In The Silver Swan, Sallie Bingham chronicles one of the great underexplored lives of the twentieth century and the very archetype of the modern woman. “Don’t touch that girl, she’ll burn your fingers,” FBI director J. Edgar Hoover once said about Doris Duke, the inheritor of James Buchanan Duke’s billion-dollar tobacco fortune. During her lifetime, she would be blamed for scorching many, including her mother and various ex-lovers. She established her first foundation when she was twenty-one; cultivated friendships with the likes of Jackie Kennedy, Imelda Marcos, and Michael Jackson; flaunted interracial relationships; and adopted a thirty-two year-old woman she believed to be the reincarnation of her deceased daughter. This is also the story of the great houses she inhabited, including the classically proportioned limestone mansion on Fifth Avenue, the sprawling Duke Farms in New Jersey, the Gilded Age mansion Rough Point in Newport, Shangri La in Honolulu, and Falcon’s Lair overlooking Beverly Hills.

Even though Duke was the subject of constant scrutiny, little beyond the tabloid accounts of her behavior has been publicly known. In 2012, when eight hundred linear feet of her personal papers were made available, Sallie Bingham set out to probe her identity. She found an alluring woman whose life was forged in the Jazz Age, who was not only an early war correspondent but also an environmentalist, a surfer, a collector of Islamic art, a savvy businesswoman who tripled her father’s fortune, and a major philanthropist with wide-ranging passions from dance to historic preservation to human rights.

In The Silver Swan, Bingham is especially interested in dissecting the stereotypes that have defined Duke’s story while also confronting the disturbing questions that cleave to her legacy.

Sallie Bingham: Sallie Bingham is the author of several memoirs, short-story collections, novels, plays, and poetry collections. Her work has been widely anthologized and has appeared in The Atlantic, New Letters, Southwest Review, and other publications. She has been a director of the National Book Critics Circle and is the founder of the Kentucky Foundation for Women, as well as the Sallie Bingham Center for Women’s History and Culture at Duke University. She has received fellowships from Yaddo, MacDowell, and the Virginia Center for the Creative Arts. Sallie's books include Passion & Prejudice: A Family Memoir, The Blue Box: Three Lives in Letters, Red Car: Stories, and The Silver Swan: In Search of Doris Duke.