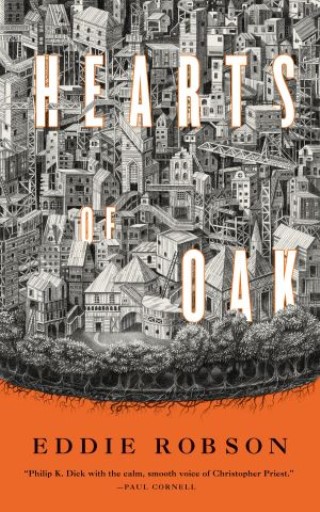 "[Hearts of Oak packs in] the sort of profound and lacerating laughter that Robson's countrymen Douglas Adams and Terry Pratchett perfected." –NPR

Hearts of Oak is a delightful science fiction adventure from Eddie Robson, the creator of the acclaimed Welcome to Our Village, Please Invade Carefully.

The buildings grow.
And the city expands.
And the people of the land are starting to behave abnormally.
Or perhaps they’ve always behaved that way, and it’s normality that’s at fault.

And the king of the land confers with his best friend, who happens to be his closest advisor, who also happens to be a talking cat. But that’s all perfectly natural and not at all weird.

Iona, close to retirement, finds that the world she has always known is nothing like she always believed it to be. There are dark forces . . . not dark. There are uncanny forces . . . no, not uncanny. There are forces, anyway, mostly slightly odd ones, and they appear to be acting in mysterious ways. It’s about town planning, it’s about cats and it’s about the nature of reality.

Eddie Robson is a British comedy and science fiction writer best known for his sitcom Welcome to Our Village, Please Invade Carefully and his work on a variety of spin-offs from the BBC Television series Doctor Who. He has written books, comics, short stories and for television and theatre, and has worked as a freelance journalist for various science fiction magazines.

Eddie is the author of Hearts of Oak.