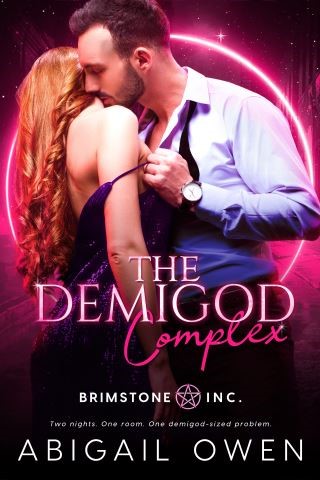 When Lyleia Naiad was head-hunted by Brimstone, Inc., for her job as Executive Assistant to a high-powered billionaire demigod, she was given one directive—do NOT fall in love with Castor Dioskouri. Doesn’t matter if he’s the son of Zeus and can electrify a room with a single glance. As an ex-nymph, she possesses a unique ability—a gift from the goddesses to protect nymphs from the randy gods—to resist her boss's charms.

Or so she thought.

He insists she accompany him to an alpha wolf shifter mating ceremony, an event where the pheromones fly, and so do clothes...and inhibitions.

Goddesses save her, because Castor has stolen into Lyleia’s heart, and she’s not so sure she can hold out much longer...

This novella was previously self published but has undergone a complete re-edit. Scenes were added, things were changed, but the kissing still remains!

Each book in the Brimstone, Inc. series is STANDALONE:
* The Demigod Complex
* Shift Out of Luck

Abigail Owen: Award-winning paranormal romance author Abigail Owen grew up consuming books and exploring the world through her writing. She loves to write witty, feisty heroines, sexy heroes who deserve them, and a cast of lovable characters to surround them (and maybe get their own stories). She currently resides in Austin, Texas, with her own personal hero, her husband, and their two children, who are growing up way too fast.