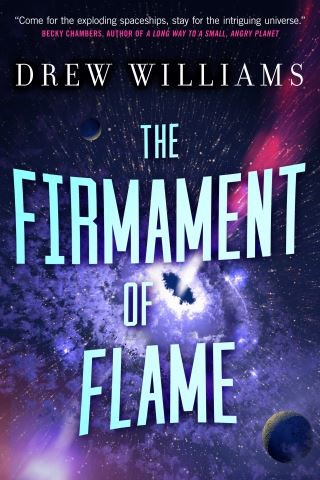 The Firmament of Flame

For fans of Firefly and James S. A. Corey's Expanse novels, The Firmament of Flame is the third installment in Drew Williams' Universe After series.

For nearly a century, the Justified have been searching for gifted children to help prevent the return of the pulse. Until recently, they thought they were the only ones.

Jane Kamali and her telekinetic protégé Esa, now seventeen, barely managed to claim victory against a Cyn—a being of pure energy—hell bent on hunting down the gifted. Now they face an army.

The Cyn and their followers will stop at nothing to find Esa and the others. No one knows what they want, but Jane, Esa, and their allies in the Justified are determined to find out.

Even if they have to go to the ends of the known universe to do it.

DREW WILLIAMS has been a bookseller in Birmingham, Alabama since he was sixteen years old, when he got the job because he came in looking for work on a day when someone else had just quit. Outside of arguing with his coworkers about whether Moby Dick is brilliant (nope) or terrible (that one), his favorite part of the job is discovering new authors and sharing them with his customers.

Drew is the author of The Universe After series, which begins with The Stars Now Unclaimed.