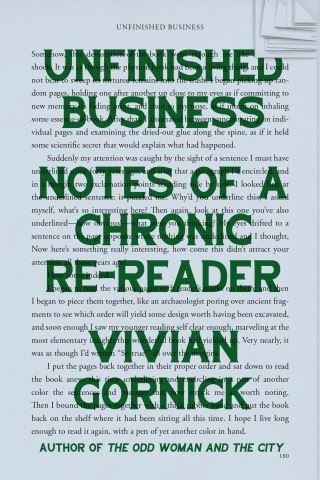 Notes of a Chronic Re-reader

I sometimes think I was born reading . . . I can’t remember the time when I didn’t have a book in my hands, my head lost to the world around me.

Unfinished Business: Notes of a Chronic Re-reader is Vivian Gornick’s celebration of passionate reading, of returning again and again to the books that have shaped her at crucial points in her life. In nine essays that traverse literary criticism, memoir, and biography, one of our most celebrated critics writes about the importance of reading—and re-reading—as life progresses. Gornick finds herself in contradictory characters within D. H. Lawrence’s Sons and Lovers, assesses womanhood in Colette’s The Vagabond and The Shackle, and considers the veracity of memory in Marguerite Duras’s The Lover. She revisits Great War novels by J. L. Carr and Pat Barker, uncovers the psychological complexity of Elizabeth Bowen’s prose, and soaks in Natalia Ginzburg, “a writer whose work has often made me love life more.” After adopting two cats, whose erratic behavior she finds vexing, she discovers Doris Lessing’s Particularly Cats.

Guided by Gornick’s trademark verve and insight, Unfinished Business is a masterful appreciation of literature’s power to illuminate our lives from a peerless writer and thinker who “still read[s] to feel the power of Life with a capital L.”

Vivian Gornick: Vivian Gornick is the author of several books, including the acclaimed memoir Fierce Attachments, named the best memoir of the past 50 years by the New York Times Book Review in 2019; the essay collections The End of the Novel of Love and The Men in My Life, both of which were nominated for the National Book Critics Circle Award for Criticism; and The Odd Woman and the City, a finalist for the National Book Critics Circle Award for Autobiography. She began her career as a staff writer for The Village Voice in 1969, and her work has since appeared in The New York Times, The Nation, The New York Review of Books, The Atlantic, and many other publications.