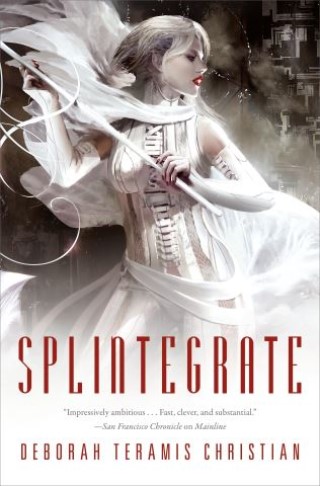 Her most devoted client is Janus, a major crime boss on Lyndir and elsewhere. But when a high-powered imperial authority decides she wants Janus out of the way, she identifies Kes as his greatest vulnerability. The seductive domina would never betray a client's trust, but a mortal threat to her Between-World sisters forces her cooperation with Janus's enemy.

Altered against her will, she is turned into a brutal weapon by Splintegrate cloning technology. It will take help from some unlikely avenues and an enormous triumph of will for Kes to survive the government's machinations. . . and pursue the independence she's craved her entire life.

Deborah Teramis Christian: DEBORAH TERAMIS CHRISTIAN is a US Army veteran, a former intelligence translator, and at various times has worked as a tech writer, journalist, role-playing game designer, editor, publisher, and sociologist. These days she is a recovering geek, having left a long career in computer systems work, and has returned to her first loves: world building, and writing science fiction and fantasy. Her books include Kar Kalim and Mainline. She currently resides in Tennessee.