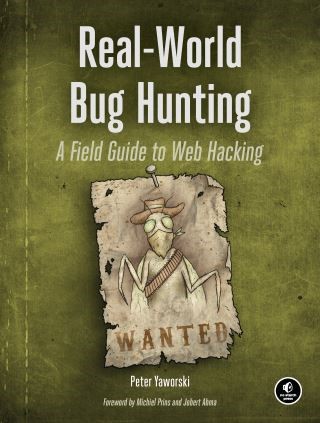 A Field Guide to Web Hacking

Learn how people break websites and how you can, too.

Real-World Bug Hunting is the premier field guide to finding software bugs. Whether you're a cyber-security beginner who wants to make the internet safer or a seasoned developer who wants to write secure code, ethical hacker Peter Yaworski will show you how it's done.

You'll learn about the most common types of bugs like cross-site scripting, insecure direct object references, and server-side request forgery. Using real-life case studies of rewarded vulnerabilities from applications like Twitter, Facebook, Google, and Uber, you'll see how hackers manage to invoke race conditions while transferring money, use URL parameter to cause users to like unintended tweets, and more.

Each chapter introduces a vulnerability type accompanied by a series of actual reported bug bounties. The book's collection of tales from the field will teach you how attackers trick users into giving away their sensitive information and how sites may reveal their vulnerabilities to savvy users. You'll even learn how you could turn your challenging new hobby into a successful career. You'll learn:

Real-World Bug Hunting is a fascinating soup-to-nuts primer on web security vulnerabilities, filled with stories from the trenches and practical wisdom. With your new understanding of site security and weaknesses, you can help make the web a safer place--and profit while you're at it.

Peter Yaworski: Peter Yaworski is a self-taught developer and ethical hacker who began building websites exclusively with Drupal. Since then, he has expanded his interest to Rails, Android app development, and software security, while producing over 100 video tutorials and interviews on YouTube covering ethical hacking, web development, and Android to help teach others what he's learned. Peter continues to be an active bug bounty participant with thanks from Shopify, HackerOne, Salesforce, Twitter, Starbucks and the US Department of Defense among others.