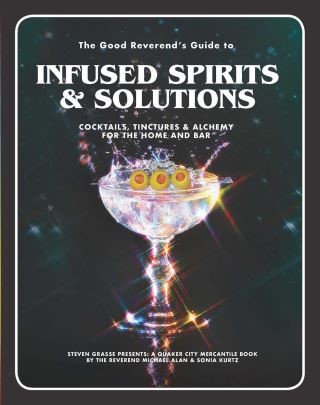 Alchemical Cocktails, Healing Elixirs, and Cleansing Solutions for the Home and Bar

A complete guide to home uses for neutral spirits, from infusions and tinctures to cocktails and cleaning solutions.

A bottle of rectified alcohol, like The Good Reverend’s Universal Spirit from Tamworth Distilling, is a bottle of possibilities. In these pages, you’ll discover over 100 recipes for infusions, tinctures, cocktails, cordials, elixirs, punches, and even household cleaners. This handbook will teach you to replicate famous liqueurs and classic cocktails, and help you prepare perfect garnishes and celebratory toasts.

With step-by-step instructions and photos, you’ll learn processes culinary, scientific, and alchemical to improve everything from your parties to your health. You’ll learn the processes of osmosis and dissolution that create the perfect infusions. You’ll be given the secrets to prep for guests lists of 1 or 100. You’ll be guided through pairing your alcoholic creations with the rhythms of nature.

Yes, with a bottle of purified spirits, you’ll be able to purify your own human spirit. These recipes explain not just the flavor benefits of their ingredients, but also the spiritual and supernatural. Discover the meanings of herbs, the ratio of the Fibonacci sequence, and the effects of moon phases, among so much more. Come for the drinks, but stay for the magic.

Michael Alan: Reverend Michael Alan is a self-taught chef and artist based in Philadelphia, Penna. His work has been featured in The New York Times, The Wall Street Journal and NPR. Colonial Spirits (Abrams Books, 2016) is his premier published work and features over 200 historically inspired illustrations and recipes. He is the creator of The Good Reverend's Universal Spirits and founder of the Church of the Universal Spirit.Steven Grasse is the renaissance brand maker behind such spirits as Hendrick’ s Gin, Art in the Age, Narragansett Beer, Sailor Jerry Rum, and Tamworth Distillery. He started his own firm, Quaker City Mercantile, in 1988, and his work across a wide variety of brands (from MTV to Guinness) and media bears two signature traits: an antic sense of play matched with an equally deep devotion to history. Along the way, Grasse has applied his renegade spirit to the page; first in the surprise smash The Evil Empire: 101 Ways England Ruined the World, then critically acclaimed Colonial Spirits: A Toast To Our Drunken History in 2016.Sonia Kurtz began working with Quaker City Mercantile in 1999 as curator and buyer for the infamous G+Mart pop-up store and art space. She has been instrumental in launching and designing both Art in the Age and Tamworth Distillery brands, including the interior spaces for both. Some of her latest projects include consulting on a new brewery for Guinness and a new QCM-run distillery in Arkansas.