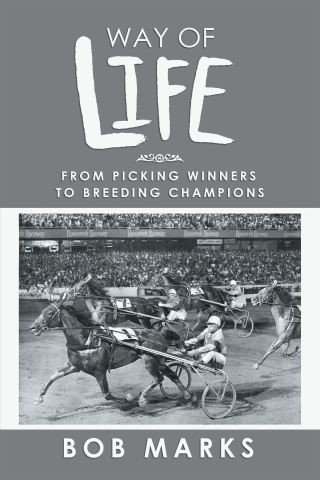 From Picking Winners to Breeding Champions

Way of Life chronicles Bob Marks’ journey from high school horseplayer at Roosevelt and Yonkers to the co-author of books on Meadow Skipper and Murray Brown. He came of age during the heyday of harness racing in New York. It was pre-OTB and the stands were packed every night as the likes of Adios Butler, Bye Bye Byrd and Overtrick dominated. While friends went off to college, he learned the finer points of betting; figured out how to use the money he carried to the track for others for his own benefit; became adept at clocking warmups; and cleaned up betting on photos. By the mid-60s he was submitting articles to Wally Rottkamp’s Top Trotter magazine and eventually took over the handicapping role there. While riding the subway to and from his day job his nose was buried in Doc Robbins Tomorrow Trots, not the New York Times. A subsequent job at Boardwalk Associates allowed him to use his public relations skills and gave him an opportunity to strut his stuff as the self-made pedigree Maven he had put so much time and effort into becoming. All of a sudden he was dealing with giants like Delmonica Hanover, Misty Raquel and Davidia Hanover. He worked on the ground breaking Inside Boardwalk newsletter, an opinion shaper as well as an ideal vehicle for advertising the syndicate’s yearlings. It was an early progenitor of HRU. And the No Nukes video he worked on was something new and different in the industry. Meanwhile Marks’ yearling prognostications and imagined races involving the best of the best from different decades were a big hit in Hub Rail. The Perretti years when Marks managed the bookings of the stallions and mares, advertised and promoted the stock for sale and wrote the newsletter. This section is a fount of information and opinions on a score of horses the farm owned, managed, and sought but didn’t get. This book is aimed at those who are seasoned harness racing fans. It is not a primer for the uninitiated, though it provides a glimpse into the world of horse racing. This is a behind the curtain look at the horses and personalities who have fascinated us over the past six decades.