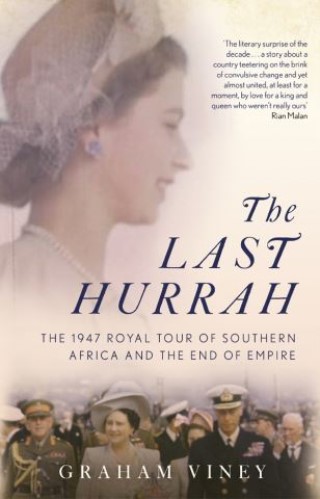 'A fascinating but too little noticed book which tells a great deal about [the Queen's] formation. It draws on a single royal trip [the 1947 royal tour of southern Africa] . . . The Last Hurrah, by Graham Viney, vividly tells the full tale.'
Charles Moore, Daily Telegraph

'Meticulously researched, and inspiringly evoked, Graham Viney relates the story of the 1947 Royal Tour of South Africa.' Hugo Vickers, author of Elizabeth, The Queen Mother and The Quest for Queen Mary

'The literary surprise of the decade . . . a story about a country teetering on the brink of convulsive change and yet almost united, at least for a moment, by love for a king and queen who weren't really ours.' Rian Malan

'Brilliantly conveys the glamour and gruelling nature of a tour that temporarily united a divided nation . . . Viney penetrates beyond the frippery and froth to provide fascinating sidelights on the history of twentieth-century South Africa.' Lady Anne Somerset, author of Elizabeth I and Queen Anne

'A thoughtful, meticulously researched study.'
David Saks, Associate Director of the South African Jewish Board of Deputies and Editor of Jewish Affairs

The Last Hurrah captures in vivid detail the 1947 royal tour of southern Africa, both the high-water mark of the British Empire and the very moment at which it began to unravel. It is also an intimate, revealing portrait of the royal family - King George VI, Queen Elizabeth and the Princesses Elizabeth and Margaret - hard at work in the national interest, and succeeding triumphantly against all odds.

The year 1947 was a pivotal moment not just in the history of the Union of South Africa, but of the British Empire itself. Later that same year India gained independence and just one year later the Afrikaner Nationalist victory in South Africa would lead inexorably to the Republic of South Africa in 1961 and its departure from the Commonwealth.

Graham Viney's book not only superbly captures a moment in the life of a fractious, recently formed 'nation', before its descent into over three decades of darkness, but also gives us an intimate and revealing portrait of the royal family. The present Queen Elizabeth must have learned a great deal about statecraft from her father, and about duty, tact and hard work from both her parents in the course of this three-month tour, during which the then princess celebrated her twenty-first birthday. It was also the family's first real experience of multiculturalism.

The royal family travelled ceaselessly, from February to April, on a specially commissioned, white-and-gold train, meeting thousands of people at every stop along the way. The tour was a show of imperial solidarity and a recognition of South Africa's contribution to the Allied cause during the Second World War, specifically that of South African prime minister Jan Smuts, who had served in both British war cabinets.

The Last Hurrah draws skilfully on many diverse sources, not least the Royal Archive at Windsor, and includes many photographs of the royal family not previously published, such as stills from film footage held by the South African National Film, Video and Sound Archives in Pretoria.