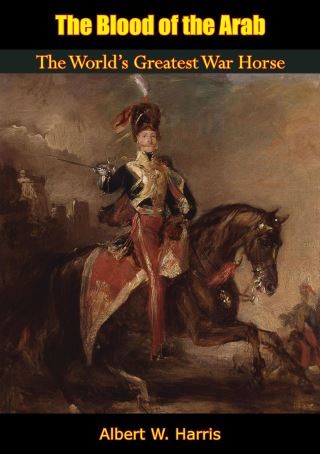 The Blood of the Arab

“IN THE FOLLOWING PAGES the author deals with an exceedingly interesting subject in a most agreeable and instructive manner. His long experience with Arab horses in the East, in the West, on the ranch, in the park, and on Endurance Rides, fits him to speak with authority. I was one of the judges of the first Endurance Ride, conducted under rigid rules and active supervision, in this country, Mr. Harris rode an Arabian mare in this difficult contest, sixty miles per day, for five successive days, with two hundred pounds up, and brought her in in fine shape, to win first place. In addition to being a fine horseman and horsemaster, he is a renowned breeder of Arabian horses.

“If one were in quest of accurate and complete information, historical or practical, about the Arab horse—data which would not glorify the Arab at the expense of fact, I should unhesitatingly refer him to the author. He owned the best Arab sire I have ever seen, whether in this country, Europe, or Asia.

“He has a large stud farm of pure-bred Arabs. He also used his sires on mares of other breeding, or no breeding, with excellent results.

“Whether one agrees with his conclusions or not, I know of no one better fitted to write of the merits and accomplishments of the Arab horse, without indulging in befogging breed-enthusiasm, than the author.”

He was born on November 4, 1867 in Cincinnati, Ohio, to Norman Waite Harris and Jacyntha Harris. His mother died when he was five, and his father remarried twice by the time he was twelve. He graduated from Gem City Business College in Quincy, Illinois in 1886 and joined his father’s investment banking firm of N.W. Harris & Co. in 1888, where he rose through the ranks. He was Vice President of Harris Trust & Savings Bank in 1909, and Bank President in 1920.

Harris was also an avid writer and great lover of animals, evidenced by many of his published book titles: Cracker Tales (1912), The Arabian Horse of Kemah (1922); The Yellow Dog (1939), The Blood of the Arab: The World's Greatest War Horse (1941), Our Forty-Dollar Horse and other Reminiscences (1952), and The First Seventy-Five Years of The Harris Organization (1957).

HENRY LEONARD (1876-1945) was an American soldier with the United States Marine Corps and a renowned equestrian. He was wounded and lost his arm at Tientsin in 1900 during the Boxer Rebellion in China (1899-1901). He served as the first Marine Attaché in China from 1905-1907 and was President Theodore Roosevelt’s aide-de-camp. Following his retirement from the army as Lieutenant-Colonel, Henry Leonard became a foxhunter and breeder of thoroughbred horses in Virginia. He later moved from Washington, D.C. to Colorado Springs and resumed his breeding operation at his Pine Valley Ranch. He died in Colorado Springs in 1945.