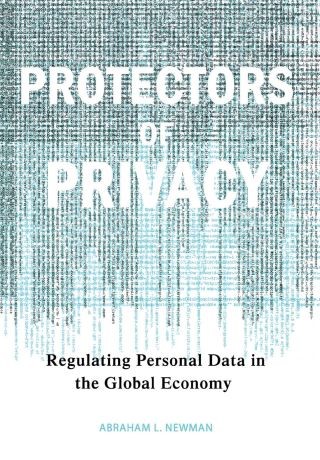 From credit-card purchases to electronic fingerprints, the amount of personal data available to government and business is growing exponentially. All industrial societies face the problem of how to regulate this vast world of information, but their governments have chosen distinctly different solutions. In Protectors of Privacy, Abraham L. Newman details how and why, in contrast to the United States, the nations of the European Union adopted comprehensive data privacy for both the public and the private sectors, enforceable by independent regulatory agencies known as data privacy authorities. Despite U.S. prominence in data technology, Newman shows, the strict privacy rules of the European Union have been adopted far more broadly across the globe than the self-regulatory approach championed by the United States. This rift has led to a series of trade and security disputes between the United States and the European Union.

Based on many interviews with politicians, civil servants, and representatives from business and NGOs, and supplemented with archival sources, statistical analysis, and examples, Protectors of Privacy delineates the two principal types of privacy regimes-comprehensive and limited. The book presents a theory of regulatory development that highlights the role of transgovernmental networks not only in implementing rules but also in actively shaping the political process surrounding policymaking. More broadly, Newman explains how Europe's institutional revolution has created in certain sectors the regulatory capacity that allows it to challenge U.S. dominance in international economic governance.