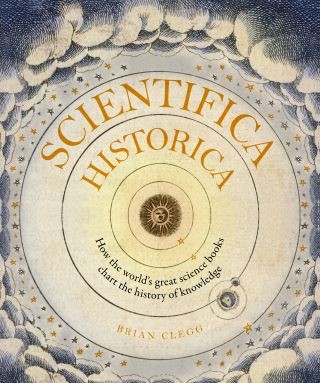 Scientifica Historica is an illustrated, essay-based review of those books that marked the development of science from ancient civilizations to the new millennium.

The book is divided into five eras and explores the leading scientific pioneers, discoveries and books within them:
Plus an introduction to the history and development of writing and books in general, and a list of the 150 greatest science books published.
From carvings and scrolls to glossy bound tomes, this book beautifully illustrates the evolution of scientific communication to the world. By recounting the history of science via its key works – those books written by the keenest minds our world has known – this book reflects the physical results of brilliant thought manifested in titles that literally changed the course of knowledge.

Brian Clegg read Natural Sciences, focusing on experimental physics, at Cambridge University. After developing hi-tech solutions for British Airways, he formed a creative consultancy advising clients ranging from the BBC to the Met Office. He has written for numerous publications including Nature, the Times, the Wall Street Journal, and has lectured at Oxford and Cambridge universities and the Royal Institution. He is editor of the book review site www.popularscience.co.uk, and his publications include A Brief History of Infinity and How to Build a Time Machine.