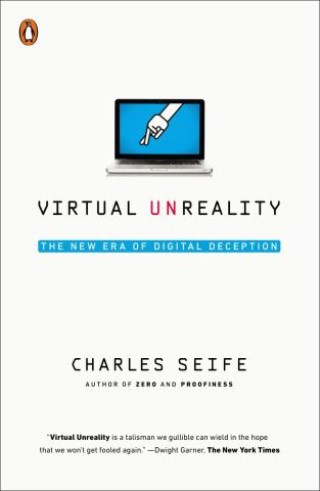 Just Because the Internet Told You, How Do You Know It's True?

Digital information is a powerful tool that spreads unbelievably rapidly, infects all corners of society, and is all but impossible to control—even when that information is actually a lie. In Virtual Unreality, Charles Seife uses the skepticism, wit, and sharp facility for analysis that captivated readers in Proofiness and Zero to take us deep into the Internet information jungle and cut a path through the trickery, fakery, and cyber skullduggery that the online world enables.

Taking on everything from breaking news coverage and online dating to program trading and that eccentric and unreliable source that is Wikipedia, Seife arms his readers with actual tools—or weapons—for discerning truth from fiction online.

Charles Seife: Charles Seife is the author of five previous books, including Proofiness and Zero, which won the PEN/Martha Albrand Award for first nonfiction and was a New York Times notable book. He has written for a wide variety of publications, including The New York Times, Wired, New Scientist, Science, Scientific American, and The Economist. He is a professor of journalism at New York University and lives in New York City.