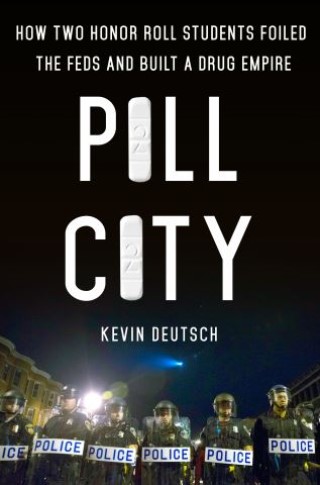 In 2015, Baltimore plunged into the worst American riots in recent history. In the chaos, two high school honor-roll students, “Brick” and “Wax, used their smarts, computer skills, ambition and gang connections to change the world of illegal drugs forever. With their gang associates, they looted pharmacies and robbed dealers, stealing over one million doses of prescription narcotics and heroin with a street value of more than $100 million.

“Brick” and “Wax” were not going to sell drugs on corners; they used location-based technology and encrypted messaging software to dispatch ordered drugs via delivery drivers—an Uber-like service that eliminated street deals and easily tapped phones. They were soon supplying cities along the East Coast, creating a whole new class of opioid addicts with the FBI and DEA trailing in their wake. To ensure their supply of drugs did not run out, the teens formed an alliance with members of the Sinaloa cartel, headed by El Chapo.

Veteran Newsday crime reporter Kevin Deutsch has been reporting on the ground in drug-ravaged neighborhoods for over a year. He’s seen the bodies. Across America, thousands are dying from opioid overdoses. This middle-class crisis has been well documented, but the inner cities, where families are being swallowed up by addiction, have been ignored. Deutsch brings us into this underworld, where social unrest and cutting-edge technology allow criminals to seed the next wave of dysfunction and despair.

Kevin Deutsch: KEVIN DEUTSCH is an award-winning criminal justice writer for Newsday and previously worked on the staff of the New York Daily News, The Miami Herald, and The Palm Beach Post. He is the author of The Triangle: A Year on the Ground with New York’s Bloods and Crips. He is an adjunct professor of journalism at Queens College and Hofstra University. He lives in New York City.