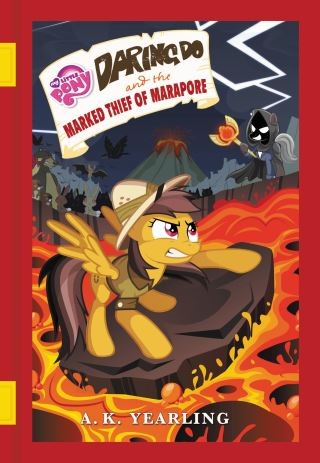 My Little Pony: Daring Do and the Marked Thief of Marapore

Daring Do--fan-favorite character and star of her own books series read by the ponies on the My Little Pony: Friendship is Magic TV show--has made the jump to her own real-life adventure series!
Three missing relics. Two mysterious stallions. One fearless Pegasus. Deep in the southern reaches of Equestria, danger is brewing...but who exactly is stirring the pot? Three remote villages have existed for centuries in the shadow of the fiery, active volcano Mount Vehoovius. The villages are protected by an extremely powerful set of magical artifacts known as the Flankara Relics. But when the precious artifacts begin to disappear right before Vehoovius is predicted to erupt, the terrified villagers start to panic. A stranger summons Daring Do to join the search, and she answers the call, even when it means putting herself in some hot lava. Can Daring Do catch the thief and save the villages before it's too late?