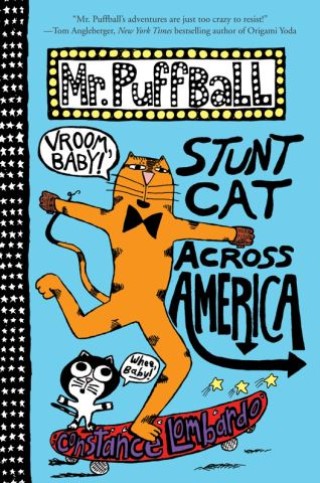 Mr. Puffball is through being a stunt cat—he’s ready to be a real actor! It’s just too dangerous to be on fire all the time.

But according to Victoria Bossypaws at Purramount Studios, Puffball and El Gato are going to lose their roles in their Hollywood buddy movie unless they can demonstrate youthful Hollywood appeal! But how? They have two weeks to film a dangerous and exciting cross-country movie reel—starring themselves—doing amazing feats of daring and coolness! They’ll cross the country in an old van—and film in Las Vegas, Hobowood, the Grand Canyon, the Hoover Dam, and Coney Island!

Much of the cast from Mr. Puffball’s first book is here, with Rosie as a fledgling director and a fantastic new addition to the group—Pickles! Amazing adventures ensue!