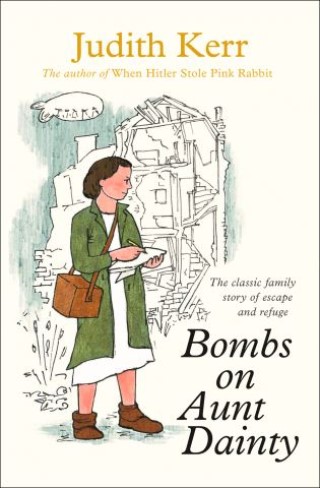 Partly autobiographical, this is the second title in Judith Kerr’s internationally acclaimed trilogy of books following the life of Anna through war-torn Germany, to London during the Blitz and her return to Berlin to discover the past…It is hard enough being a teenager in London during the Blitz, finding yourself in love and wondering every night whether you will survive the bombs. But it is even harder for Anna, who is still officially classified as an “enemy alien”. Those bombs are coming from Germany – the country that was once her own. If Hitler invades, can she and her beloved refugee family possibly survive?This was previously published as The Other Way Round.

Judith Kerr: Judith Kerr OBE was born in Berlin. Her family left Germany in 1933 to escape the rising Nazi party, and came to England. She studied at the Central School of Art and later worked as a scriptwriter for the BBC. Judith married the celebrated screenwriter Nigel Kneale in 1954. She left the BBC to look after their two children, who inspired her first picture book, The Tiger Who Came to Tea. Published in 1968 and never out of print in the fifty years since, it has become a much-loved classic and perennial bestseller. Judith was awarded the Booktrust Lifetime Achievement Award in 2016, and in 2019 was named Illustrator of the Year at the British Book Awards. Judith died in May 2019 at the age of 95, and her stories continue to entertain and delight generations of children.